Join 25,200+ Jiu-Jitsu practitioners to the only place on Earth to learn from Master Rickson Gracie. Let's level up!

Let me try it first

Rickson's 2000 fight against Masakatsu Funaki was a triumphant finish to a triumphant career. He had come a long way, from basically being forced by his dad to win his first fight twenty years prior, to guiding himself now through a bout without relying on his eyes.
Below, you'll find his final thoughts on the ordeal. (And here's part 2, in case you missed some of the story.)
"But it was a confirmation for me, in my mind, that I was all ready to do it without having my mindset as my enemy, without having my fear controlling the situation. So, based on that experience, I was able to confirm my mindset process of believing, of surrendering, of acceptance, of fate, was dealing to the max.
"And I was very happy with the outcome of this fight, not only because I won, but because I could control my personal panic, my discomfort in my situation—kept managing everything through breathing, through calmness, through good visualization. And everything went well, and it was a good confirmation in my mind. Even before that, I was already preparing and ready to understand and to live that kind of emotions without falling apart."
Our interviewer had a follow-up question here: "And you didn't need, at this point, your father or your older brother. You were on your own, and it all went well, right?"
Rickson answered: "I feel like, after my self-consciousness about my lack of, you know... what was missing in that first Zulu fight, it was not something that had to be remembered again. It was in my mind, in my daily visualizations: 'I cannot let this repeat.' So, they're there to support me, to put me in the right track; but once I get on the track, I was not dependable of them for that matter again; I was just free of that situation, because it's up to me now to know how to recognize my enemy, to accept my defeat, how to be ready to die under pressure."

Let's jump right back into the middle of Rickson's extraordinary account of his 2000 fight against the very experienced Masakatsu Funaki. (Part 1 is here.)
"So, as I have this kind of problem, and nobody knew, and I fell back, Royler tells me, 'Rickson, stand up. What are you doing?' I could not even argue with him and say 'Oh, I have a bad eye.' So nobody knew what the problem was. My eye was not swollen yet. And I knew I had a problem there, but I was still thinking the fight was not over—it was far from over.
"I could not let my opponent know I was damaged, so I was doing a poker face all the time, not even putting my hand too much on my eye, so I just tried to keep my posture. And as he kicked me on the legs, seventy thousand people at the same time [grunting].
"So I was there in a very bad shape. But after forty-five seconds in that kind of situation, my eye... This one was not good, but the other one starts to get the perspective again. And then I, immediately, as I start to see it, different than what my opponent's thinking (I was in retreat, I was afraid, I was in doubt)...
"I was just blind.
"So I start to see well; I immediately went to his knee and stood up, and confronted the guy; he expected me to do what I was doing before, but I instead pulled him down; he lost his balance; I mounted, and then went for his back and choked him out."
May 17, 2022 02:28 PM

So cool to hear this from the Master’s perspective

We've covered Rickson Gracie's vale-tudo debut extensively. (Come here if you need a refresher.)
Now we travel twenty years forward in time, to the year 2000, when Rickson had his last official fight, against Masakatsu Funaki.
In our recent group interview, Luca Atalla, a long-time friend, had this question for Rickson: "You were fortunate to have your father and your older brother there in your corner against Zulu. But years later, something happened, and you didn't have the same experience, even though you had Royler and other guys. You lost your vision, and that happened to be your last fight. I was there, but nobody in the stadium knew exactly the problem you were having at that moment, without seeing anything, and just delivering your destiny to nature. Can we go a little further ahead and connect the dots from Zulu to that point?"
Here's part 1 of Rickson's first-hand account of fighting blind against an extremely dangerous opponent:
"After the fight with Zulu, again, I aligned myself to be in one direction only, to be pushing forward—no matter who I'm gonna fight, I'm gonna believe it to the end; if I get killed on the mission, so be it; I will be accepting that... So I was one hundred percent fully forward, doing exactly what I had to do to accomplish my fights, my life.
"So my mindset's ready, my physicality is ready, my heart feels good... motivated. So everything was in place, and I keep fighting, I keep training hard, I keep winning, keep everything fine.
"In my last fight, it was absolutely confirmation of everything I could achieve as a fighter, because I get punched in the face in the middle of the fight; and the nerve, the optical nerve, disconnected from behind; so if you have a punched eye, you stop the vision of both eyes, because you just cannot see with both eyes.
"So I receive that punch, I have an orbital fracture in my eye; so as I start to move my eye, I couldn't look up; just one eye moved up; the other one is stopped, broken; there's a fracture, and the eye could not move anymore."

Rickson on why most fighters don't copy his breathing (part 2)

In a recent interview, Luca Atalla had this question for Rickson Gracie: "In the 80s and 90s, you were a huge reference as the undisputed champion, and everybody knew that you were really into breathing. Why didn't people look to develop this skill? It's very strange, because people look at you and try to pass the guard like you, to finish the armbar like you, but nobody was interested in breathing like you. Why do you think?"
Read on for the second half of the master's answer, and find part 1 here.
"In the past, nobody did elastic training for functional strength; nobody did ice baths; and I was just finding myself ways to cope with my needs of 'Man, if I can stay in this freezing water and find myself calm to think about poetry, I'm ready to die anytime, because this comfort I find myself in here is unbelievable.' So I put myself in that, without nobody teaching me, without no [?] ice...
"So people started getting ice baths now, 30 years after myself getting ice baths. And even though the ice baths today, they do with the head up, which is just 40 percent of the problem... Start putting a snorkel and putting the head under the ice—you're gonna see the difference, because you feel like the pain in the eyes, the ears, the head starts to explode; and you have to put all this in account to be calm and say 'Okay; if I'm gonna die...' and achieve my calmness. So, once I achieved my calmness, I was ready to fight even the devil himself.
"So I was seeking for breathing not only to help me in my effectiveness on the mat, which sometimes doesn't play that much difference, but also to heal my spiritual and my mental aspects of insecure state of being. And once I learned I could affect my emotional and spiritual through breathing, it was another extra layer of motivation to keep breathing, because I felt like it was a solution for everything through a good mindset.
"And people, because they don't have the same challenges, they don't have the same things to achieve, they feel like 'Okay; I don't know how to breathe, but I still can pass guard, I still—' But they're not thinking about the possibility to die tomorrow; they don't think about the possibility to fight somebody with a different style, in a different weight division—whatever nightmare. So I was putting myself always with the worst nightmares in my perspective. And to cope with that, breathing was a very early solution for me."
May 14, 2022 11:18 AM
James Gallogly commented:

Inspirational and powerful tools 🧊💨Structured breathing and cold therapy push the warrior to his true limits beyond fear and the ego. By your example I endeavor to incorporate both deeper into my practice + training. Thank you master for setting such a powerful example!

Protect your back, land on top

Turtle position in Jiu-Jitsu and grappling is when you are belly down, using your knees and elbows as support.
Master Rickson Gracie teaches you to deal with a training partner on top, trying to submit you or take your back.
First, he addresses the awareness of keeping mobile and agile for protection. Then, he shows one option to grab a leg and use your body weight to turnover and land on top.
Rickson teases what comes next: "This is the first (technique) of many." 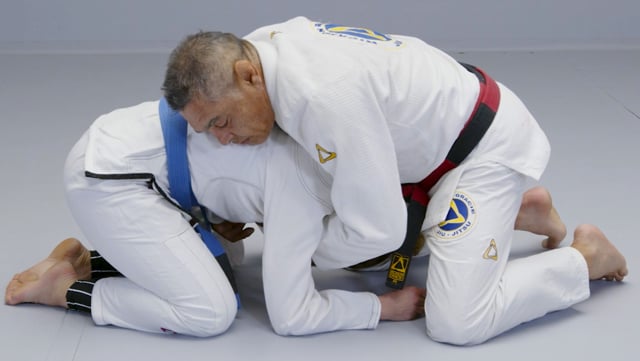 Want to receive notifications and interact with the community?

So cool to hear this from the Master’s perspective

Inspirational and powerful tools 🧊💨Structured breathing and cold therapy push the warrior to his true limits beyond fear and the ego. By your example I endeavor to incorporate both deeper into my practice + training. Thank you master for setting such a powerful example!